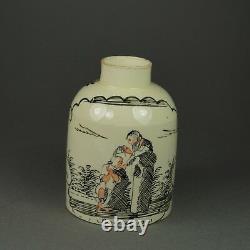 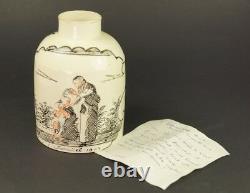 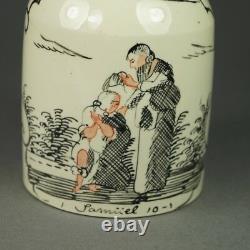 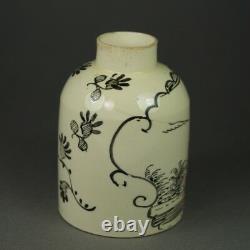 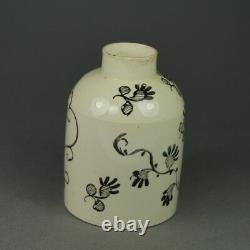 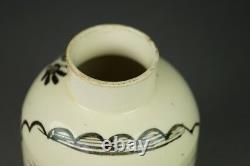 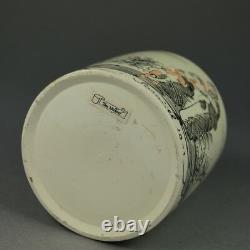 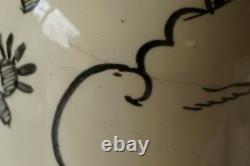 A George III period creamware tea caddy produced in Leeds, England and then sent to Holland to be decorated in enamels using an en grisaille palette. The pattern depicts a Jesuit Ware scene from 1 Samuel 10-1. Tom Walford was one of the major British collectors of early British pottery, particularly creamware. He researched each item of his collection thoroughly; leaving no shard unturned so to speak and often proved wrong the established theories on factory attributions. He was an active member of many societies and wrote for and had articles published by The English Ceramics Circle.

His taste was exemplary having many rare and interesting examples in his huge collection. We are honoured to offer for sale some of his fine examples. A hand written piece of paper in Tom Walfords hand can be found inside the caddy which reads.

Then Samuel took a vial of oil, and poured it upon his head, and kissed him, and said'is it not because the Lord hath anointed thee to be captain over his inheritance? Provenance - Ex the late Tom Walford collection, Tom was one of the major British collectors of early British pottery, particularly creamware. Eight 4.25 inch (11 cm), and.

Diameter 3 inch (7.5 cm). Condition: As is so common with 18th century tea canisters, it is missing its lid.

There is a diagonal hairline of 5 cm to the left side and a very feint 1 cm hairline to the neck. Very minor enamel loss and some minor old staining to the interior. Please see the other toy tea bowl and saucer from this same collection shown in the final image, retailed separately. The item "Antique 18th Century English Leeds Creamware Tea Caddy Canister Provenance 1770s" is in sale since Tuesday, April 10, 2018. This item is in the category "Pottery & Glass\Decorative Pottery & Glassware\Vases".

The seller is "thechapterhouse" and is located in Gloucestershire. This item can be shipped worldwide.